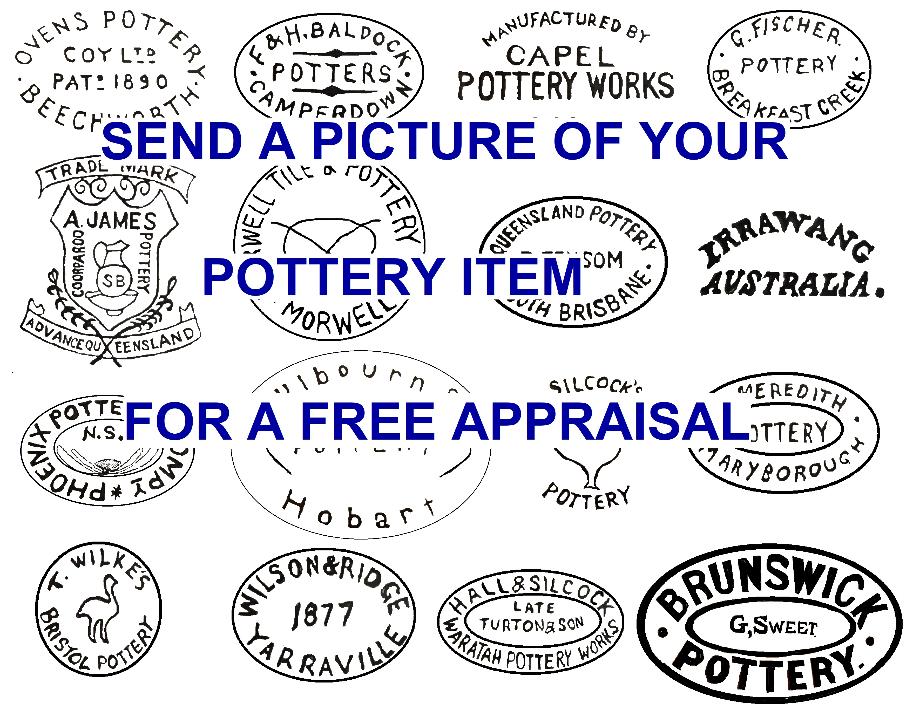 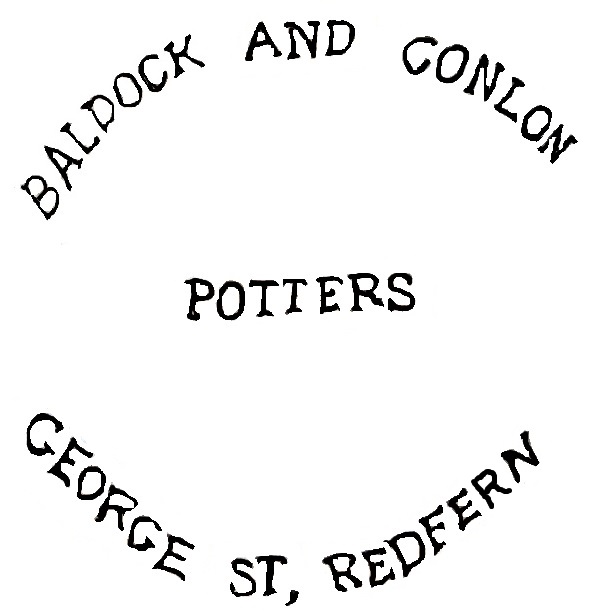 John Brazier was born in Birmingham England in 1857, arrived in Australia in July 1883.  Settled in Mackay, worked burning and selling charcoal, moved to Coopers Plains in 1892 and started a Brick Making Business.  In 1894 he started the Bundamba Brick and Tile Co, then in 1900 John moved to Kleinton and took up the site of the Toowoomba Brick Company and by  1910 was producing domestic pottery as well as bricks. Pottery produced included bread crocks, spirit barrels, bung jars, demijohns, tea pots, jugs and mixing bowls.  He continued the business until 1920, when he retired and moved to Southport.  John Brazier died in 1944. 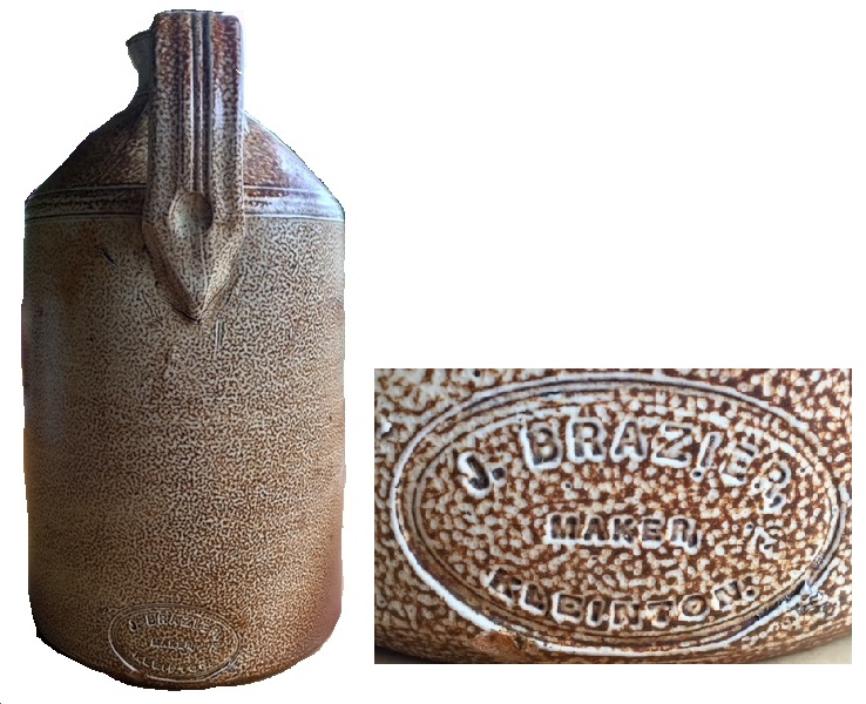 James Brough was born in Stoke-on Trent in 1850, son of a potter.  Served his apprenticeship at Copeland and Sons Staffordshire pottery.  Brough emigrated to Australia in 1875 and worked at Brunswick Pottery.  In 1883 ha was appointed overseer at Lithgow Pottery, until he left in 1886 and went to work at Knight Brothers' Victoria Pottery in Lal Lal, then in 1890 Brough went back to Lithgow Pottery.  He left there in 1894 and went on to Sydney Pottery Company until 1897 from there he went back to Melbourne and was employed at McNair Brothers' Burnley Pottery. TBC 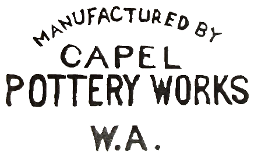 Michael Conlon was born in Wollongong in 1841, learnt his trade at Enoch Fowler’s Pottery in Glebe.  He then went into partnership with the Baldock Brothers at Redfern Pottery Works.  In 1877 Conlon started his own business in Glebe, then went into a partnership with John Cotter 1878.  They produced bricks, pipes, ginger beer bottles, jars and pots.

A A FRITSCH MELBOURNE POTTERY

Charles Tibbs was born in 1830 in Hobart, at the age of 17 he established the Goulburn Street Pottery, short lived venture due to quality of his products.  He produced flower pots, lidded bung jars, jugs, crocks and bottles.

George Duncan Guthrie was born in Johnstone, Scotland in 1828.  Migrated to Australia, arrived on the ship “Washington” after the ship was wrecked off Cape Troubridge, South Australia in 1850.  Guthrie made his way to Sydney.  In 1851 in Partnership with Michael Doyle established the Camperdown Pottery.   They produced ginger beer bottles and bricks.  Venture with Doyle was dissolved in 1854, after Guthrie had spent some time in Melbourne operating a import - export business. Guthrie would later go on to establish the Bendigo Pottery.

Frank Arthur Harris was born in Melbourne in 1853 and died early 1900's.  Harris became prominent in Preston in 1878 when he started The Fitzroy Steam Brick Pipe Tile and Pottery Works in Collier Street.  His business was successful up until he sold his interest in 1888, getting out at the right time as the Maritime Strike of 1890 and the depression of the early 1890’s saw the new company, the Builders’ Brick and Tile Company, forced into liquidation in March 1893.

Henry Hart and Edward Gallagher established the Standard Pottery in 1886, changed name to Standard Steam & Pottery Works in 1890.  They produced garden pots and urns, bird fountains and nesting boxes, garden edge tiles and chimney pots.  Company ceased making these wares in 1891, due to increased competition, continued manufacturing bricks and pipes until operation was completely closed in 1920. 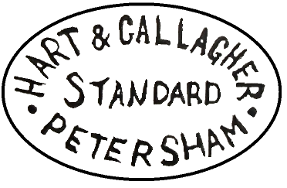 R HILL POTTERY GEEVESTON -  Pottery operated 1851 - 1852
Richard Hill started a pottery business in 1851, but later abandoned this due to the large numbers of people moving to the Victorian goldfields.
Pots and storage jars were shipped to Hobart for sale

Richard Hambleton, George Lindop and Benjamin Eastwood took over the site of the Beechworth Pottery Company Limited at Hurdle Flat in 1886.  Short lived venture, with Ovens Pottery Co Ltd taking over in 1888.  They produced storage jars, pots, demijohns and bottles. 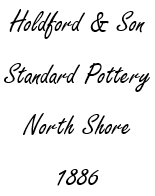 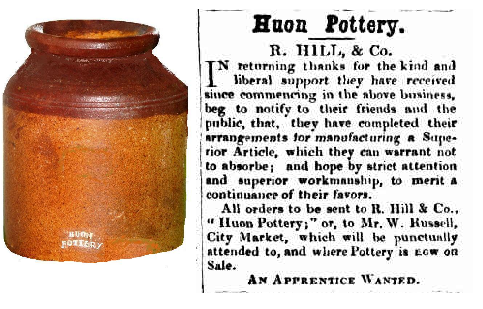 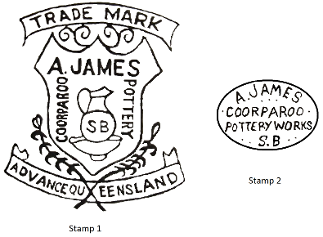 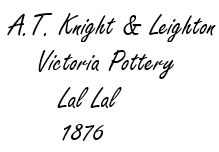 John Charles Koster, was born in Adelaide in 1855, actually christened Johann Carl.  At 15 he started working for a local brickmaker James Cox.  Started his own brickworks in partnership with Emanuel Reedy in 1880.  Partnership dissolved in 1886, then in 1888 Koster started his own Pottery in North Norwood, called it Premier Pottery. Koster died in 1912 aged 57, his wife Alice and son Edward took over the Pottery.  Alice died in 1937, leaving Edward to run the Pottery.  Bit of a scandal in 1977 when an office manager embezzled a huge amount of money and Edward was forced to sell, he died a year later in 1978.  The pottery closed in 1980, and the Norwood Council landscaped the area and called it Koster Park 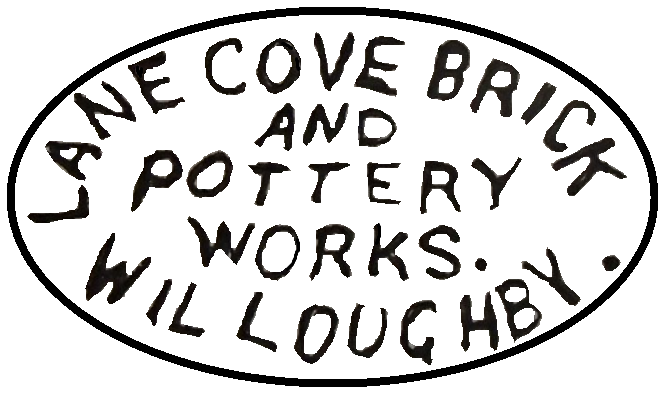 Born in Burslem, England 1777, learnt his trade at local Staffordshire Potteries.  Convicted for theft in 1819, was transported to Australia on Brig ‘Recovery”, arrived 18th December 1819.  Leak worked in Government Pottery until 1821 when he set up his own Pottery, which operated until his death in 1838.  Leak produced stoneware ginger beer bottles, blacking jars, jugs, pots, demijohns, spirits barrels, pipes, tiles and bricks. 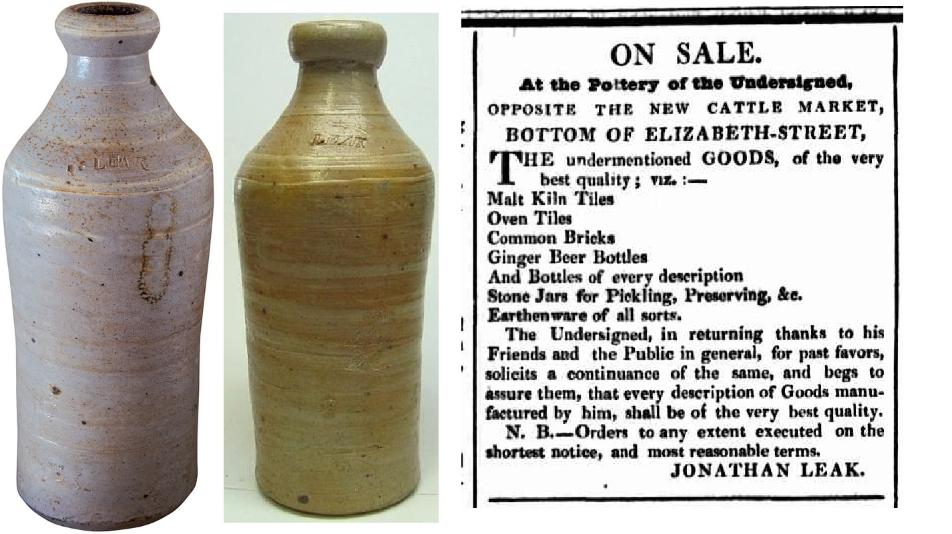 Gilbert McArthur was born in 1803 in Greenock, Scotland.  Migrated to Australia and arrived on the ship “Minerva” in 1838.  Established a pottery in Camperdown producing bricks and ginger beer bottles. Bottles marked with Brewers Name made by Mcarthur include N Dunn, C Dunn and J Munro.  Pottery closed in 1842.  In 1857 Gilbert’s son Gilbert Jnr, established the Clyde Pottery in Camperdown, moved to Ashfield in 1904 and was sold to William Abbott.  They produced The Clyde Cooler, a butter cooler, also flower pots, chimney pots and jars.

Established in 1890 by James Henty of Melbourne, he procured a 12 acre site near the Morwell Railway Station.  By 1904 the Company had changed name to Morwell Brick, Tile and Pottery Co.  Ceased operation in 1918 when the Company was dissolved.  As well as bricks and tiles they produced stoneware teapots, jugs, cheese covers, crocks, water filters, barrels, spittoons, vases, jardiniers,  urns, flower pots, storage jars, bottles and demijohns. 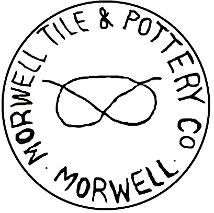 William Piercy born in Nettlebed England in 1834, arrived in Adelaide aboard the Ship “Trevlyan” in 1866.  Formed a partnership with Robert Davies and established the South Australian Pottery.  Partnership with Davies ceased in 1869, and Piercy continued the business on his own.  In 1877 he formed another partnership with Thomas Tyley, and continued until 1885, when William Piercy died aged 51.  They produced stoneware pans, jugs, vases, ginger beer bottles, demijohns, storage jars, bung jars, urns, crocks, barrels, flower pots, butter coolers and water filters. 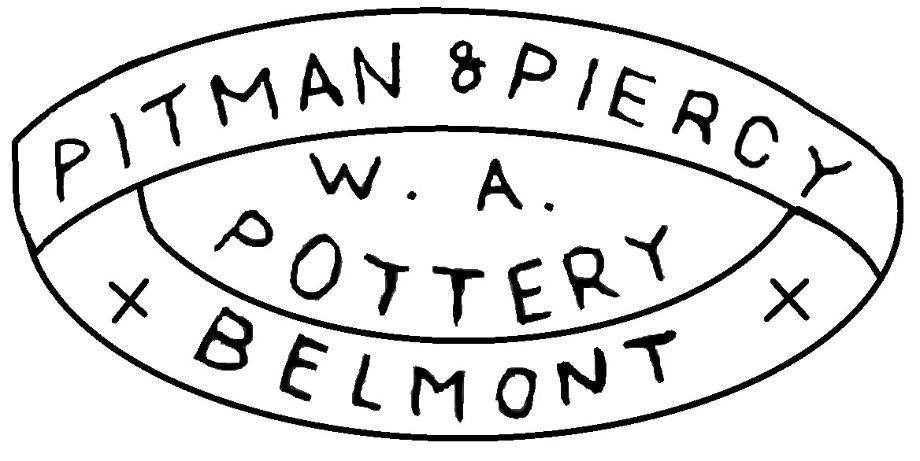 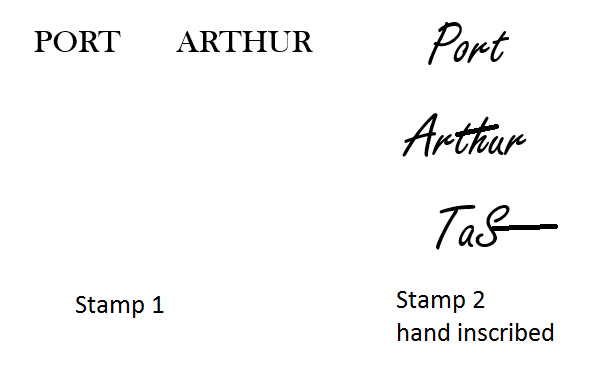 James Sherwin was born in Staffordshire, England in 1788, he moved to Russia and set up a Pottery in 1821.  He then emigrated to Australia in 1830, after a disastrous flood that claimed the life of his wife and son.  He established a Pottery at Potters Hill, Kangaroo Bottom. Hobart soon after.  Sherwin ran a successful business producing quality wares until his death in 1854.  He produced stoneware flower pots, teapots, cups and saucers, plates, cheese covers, jugs, mugs, ewers, ginger beer bottles, vases, basins, storage jars, pots and bowls. 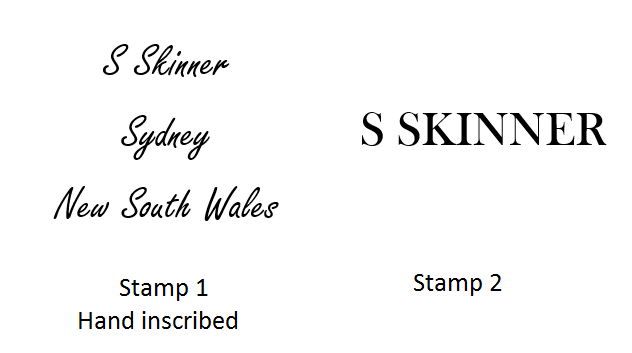 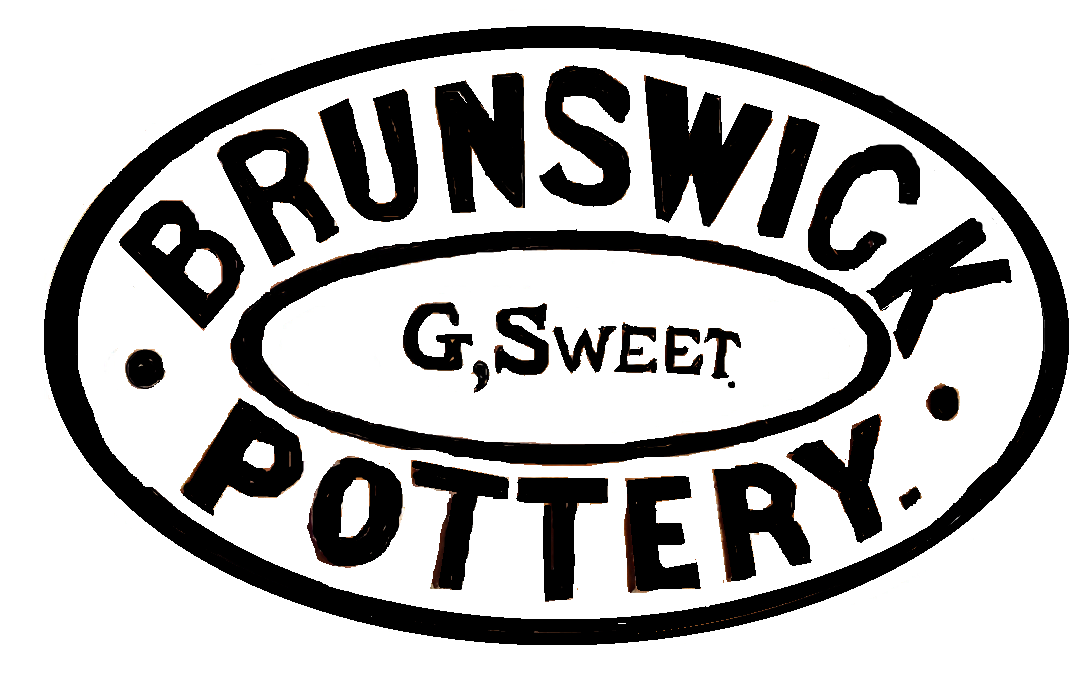 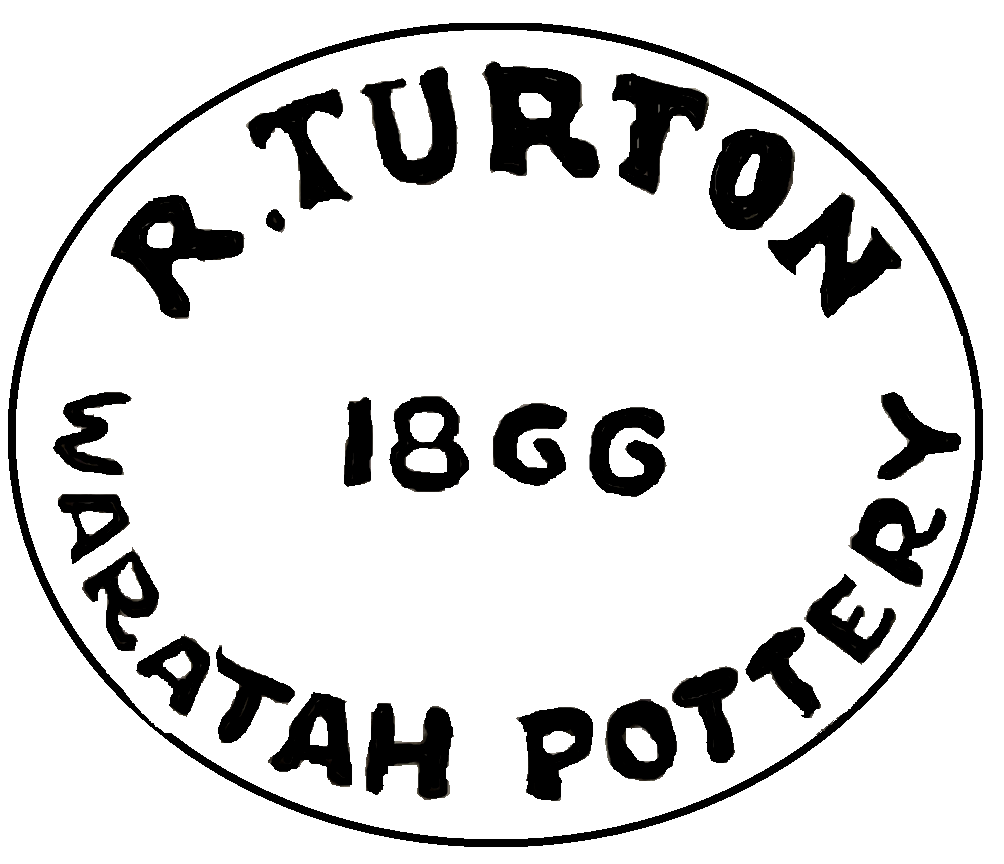 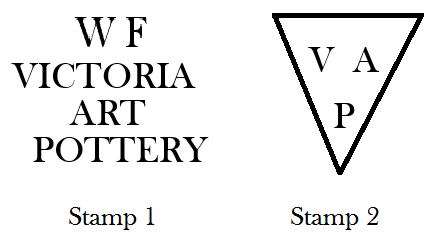 Jacques Wilson formed a partnership with James Ridge and established the Footscray Pottery in 1877.  By 1888 the clay source had run out, so he Pottery was moved to Yarraville and named Melbourne Pottery Works. Anew company, Yarraville Pottery Works Ltd was started in 1896, but ceased operation on 1897.  They produced wall plaques, bread plates, give us this day our daily bread plates, ginger beer bottles, bowls, jars, dishes, spittoons, teapots, jugs, basins, baking dishes, jam pots, butter coolers, spirit and wine barrels and demijohns.

Henry Yeates was born in 1794 in England, transported to Sydney in 1814 for stealing.  He was moved from Sydney to Port Arthur in 1821 and released in 1822.  Established the Longford Pottery in 1849, short lived venture lasting only two years.  Yeates died in Longford in 1861 aged 68.  He produced stoneware bung jars, flower pots, cream pans, baking dishes, bottles, demijohns and barrels.